This time last year the name Lupita Nyong’o would have drawn a blank expression on the face’s of most people. After launching into Hollywood big screen in the epic movie 12 Years a Slave Lupita is now one of Hollywood’s darlings, and considered to be fashions latest icon. Named as People magazines “most beautiful woman of 2014″ she is currently the lady who can do no wrong, or is she? 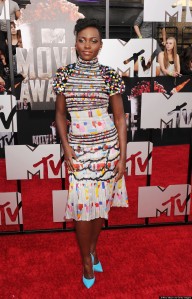 Where some are concerned, there is the view that Ms Nyong’o should be putting Africa on the map by show casing African designers on the Red Carpet and award ceremonies. Already the poster child for the darker skinned woman, Ms Nyong’o has put the plight faced by some darker skinned black women in the spot light with her speech on black beauty at the Essence Black Women in Hollywood Luncheon.

Her speech opened with reference to a letter received from a fan which read “Dear Lupita, I think you’re really lucky to be this Black but yet this successful in Hollywood overnight. I was just about to buy Dencia’s Whitenicious cream to lighten my skin when you appeared on the world map and saved me.” Clearly someone who is proving to be influential, what responsibility does she have, if any to wear African? Should Lupita Nyong’o be responsible for championing Africa’s designers?

Currently the face of Lancôme cosmetics, recently cast in the Mui Mui campaign, Ms Nyong’o has been seen wearing some of the most desirable luxury designers, such as Prada, Chanel, Ralph Lauren, Christian Dior and Gucci, making her a clothes horse for the brand. However with supermodels Iman and Naomi Campbell listing some of these designers in their campaign against designer’s who fail to use models of colour in their fashion shows, is Ms Nyong’o not feeding into the same machine which dictates what should be perceived as beauty, perpetuating the same discrimination she felt prior to her recent success?

So should Ms Nyong’o wear African? Is African fashion something that should be forced on to the masses? Should we not value it for its design, craftsmanship and creativity, rather than its popularity? And with brands coming out of Africa, and being developed by people of African origin, should we not expect to also see Ms Nyong’o wearing the likes of Jewel by Lisa, Eki Orleans, Christie Brown, Mimi Plange, Gavin Rajah or David Tlale? 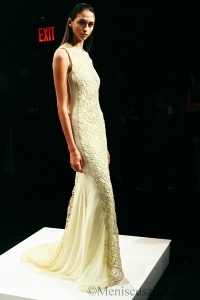