Borrowed, inspired, influenced, there have been many discussions on how much of an impact African Art had on Pablo Picasso, if any at all. Some note that Picasso never acknowledged that African Art had an influence on what has been referred to as his “African Period”  despite the fact that much of his work during this period had clear references to African pieces.

Known for being innovative and an artistic genius, little reference is made to the influence of African art on Picasso’s work. Introduced to traditional African art in Paris, it was during a visit to the first Anthropological museum in Paris Musee d’ Ethnographie du Trocadero Picasso was said to have found inspiration for Les Demoiselles d’Avignon, which has been said to be the early development of Cubism, an early 20th century avant-garde art movement. During interview with French writer Andre Malraux Picasso commented “The masks were not like any other pieces of sculpture. Not at all. They were magic things… The Negro pieces were intercesseurs, mediators…”

The late 19th century saw what was referred to as the “Scramble for Africa”  which saw the invasion, occupation and colonisation of African territory. This period saw the French elite travel to Africa in search adventure and riches, which resulted in African Art being brought back to homes and museums in Paris. There was said to be two styles of African sculpture which influenced  Les Demoiselles d’Avignon, reliquary figures from the Bakota (Kota) people of Gabon and masks from the Dan people of the Ivory Cost. The painting was originally seen as radical, and the antithesis of everything that was considered beautiful, but later seen to be a defining masterpiece of modern art.

During this period in time African art was considered by scholars to be that of primitive people, and was said to have prime elements from which Western art had evolved. African and non-classical art had acquired the term primitivism, which alleged to have originally been a positive term, despite its negative connotations, despite this Picasso and other artist expressed an interest in collecting African Art, and it was said to be Henri Matisse who first introduced Picasso to African Art. 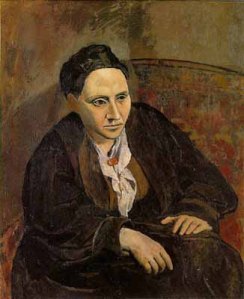 It was Matisse’s showing of a newly acquired Vili figurine form the Democratic Republic of Congo that was said to be the influence for Picasso completing his portrait of Gertrude Stein, who was said to have sat 90 times for the portrait. Picasso erased the painting of her face, replacing it with African mask like features. Parallels can be seen between works such as Picasso’s Standing Nude painting and Senufo sculpture from the Ivory Coast.

It was 19th century art historian Daniel-Henry Kahnweiler who made the link between African sculpture  and Cubism, commenting on a Wobe mask from the Ivory Coast, owned by Picasso at the time, making the link between the abstract transparency of the mask leading to the transparent planes found in Cubism.

Dr. Gus Casley-Hayford seems to have summed it up in his talk entitled “The silent Muse: the influence of African Art on Picasso’s Early Work” commenting on how focus was placed on the artists Picasso influenced, but not on the artist who influenced Picasso.

Picasso and Africa: How African Art Influenced Pablo Picasso and His Work

The silent Muse: the influence of African Art on Picasso’s Early Work